A woman on Reddit has gone viral with a very long-winded story about a neighbor’s “creepy” frog statue, and how she allegedly campaigned to remove it from their yard. It all began when the 35-year-old woman and her husband went on a walk with their six-year-old daughter.

The woman claims that the lockdown has caused her family to spend more time taking walks to get outside of the house. She wrote, “Recently one of our neighbors put up a frog statuette… for display outside their house,” she writes. “I find it really creepy and so does my husband. My daughter hates it. She is absolutely terrified of it. Now she refuses to go on walks.” The woman said she contacted the owners of the frog and asked them to “move the statuette so it is no longer on display.”

The frog statue owner wasn’t receptive to the idea of removing it and people on social media weren’t receptive to her tactics to have it removed. Many people have chimed in on how ridiculous the woman is being and how overly dramatic she made the whole situation. 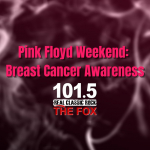 Click the image to learn how to sponsor the Gouverneur Breast Cancer Fund! Proudly Sponsored by Orvis St. Discount Wine & Liquors All the limited edition fall bourbons have arrived at Orvis Street! Call ahead for Carside Delivery at 315–764-0736 and remember to ask about your favorite case of wine! For Those in…