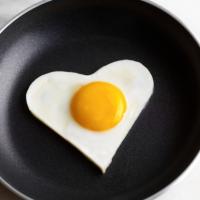 World War 1, World War 2, the iPhone – Emma Morano has seen it all. At 117-years-old, the Italian native is the oldest person alive and she celebrated her birthday yesterday. Arriving  November 29th, 1889, Morano is believed to be the last person alive who was born in the 19th century. This means she was born before the Wright Brothers took their first flight, before William McKinley was sworn into office, and before the first Major League Baseball World Series.

But what’s as fascinating as Morano’s age is her diet: it’s eggs. Yup, she only eats eggs – all day every day. And a little brandy. “When I first knew her she used to eat three eggs a day,” her doctor, Carlo Bava, explains. “Two raw, and one fried. Today she has slowed down a bit, reducing the number to two some days because she says three can be too much.”

Still, Emma credits being single for her longevity. Not only has she made it 117, but Morano is also doing quite well. Not only has she outlived all of her eight brothers and sisters (one of those died at 102), but she’s living on her own. Looks like she won’t be leggo-ing her eggos anytime soon. But will she eat cake? Not likely. “The last time I ate a little,” she notes. “But then I did not feel good.”