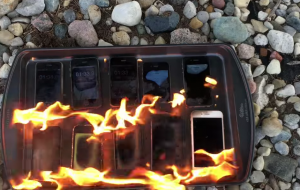 If Zach Straley ever asks to borrow your iPhone, tell him NO. Zach’s hobby is torture testing iPhones and posting the videos on YouTube. In the past, he’s put a phone in a blender and stuck one into a Big Mac and threw it off a building

. And in his most recent test, he shows that the older the phone, the better it lasts when ON FIRE.

For his shenanigans, Zach spread 10 iPhones out on a cookie sheet, started the timers on each, then doused them with gasoline and set them on fire. After they cooled down, the video showed that the older iPhones still worked after being ablaze, while the newer ones were completely toasted.

The owners of each of those phones are still looking for Zach, who may have gone into hiding.